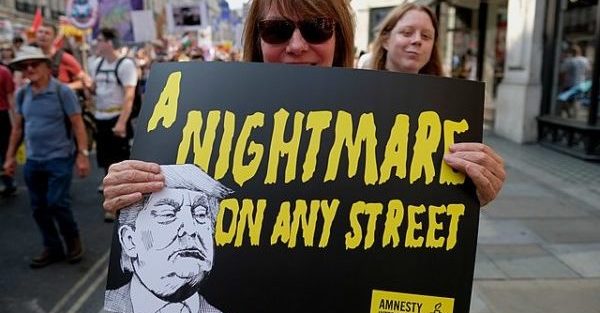 President Trump’s campaign has suspended television ads while they review their strategy. Apparently, someone pointed out to the president that using video of protests happening because of Trump’s bellicose policy of exclusion and division and blaming it on President Biden was not such a good idea. Or, maybe they just need to add something about how great America has become under this administration.

Maybe they need to add a bit about the jobless rate, which has jumped to 14.7 percent, the highest level since the Great Depression. Maybe Trump can claim “you thought that depression was great, give me four more years and you will see it was nothing. I know how to make a depression great, the greatest depression.”

It’s possible the new campaign manager, Bill Stephen, wants to add something about health care, which Trump has promised to fix in the next two weeks. Of course, he promised that to Chris Wallace two weeks ago and we have seen nothing, heard nothing. And expect more nothing.

Time is measured differently in Trump’s world. You just know his health care plan is going to be phenomenal, look at what he accomplished with Covid19. Almost singlehandedly he has made it the greatest pandemic in the history of the US. He had to overcome all that science and medicine and advice from knowledgeable people to do it, too.

Of course, it isn’t impossible that Trump wants come up with a few more instances of how the Democrats have sabotaged his relief package, and how the press has managed to find a way to blame it on him. Just this week he had to remind us of the fact that Nobody Likes Him.

Maybe his new approach is going to be centered around the message that all of this bad stuff happened because everybody is just out to make him look bad. People are getting sick and dying, losing their jobs and homes just because they find him so distasteful. “It’s not my fault, I swear to God.” An interesting strategy, to be sure.

No matter what the reason, living in a battleground state, Ohio, it’s a nice break. I’m a little weary of the message that Trump, who has ruined America’s standing in the world, has allowed a controllable disease to rage out of control, who has almost ruined the economy beyond repair tell me how he is the only candidate who can fix this mess. If it weren’t so awful it would be funny.

Writing is a way of discovery. It brings focus to things, and it helps a person understand the thoughts that are otherwise unexplained. If life is history we should try to leave the world a better place. I contribute regularly to The Ugly Writers and The Good Men Project. and Enclave. And I am thrilled to be allowed to write a monthly column for TheWildWord.com. You can view more of my writing at https://lifeexplainedinaway.wordpress.com Besides that I am a proud father, a lucky husband and a full time employee, in central Ohio.

Facebook9Tweet3PinEmailShares12
wpDiscuz
0
0
Would love your thoughts, please comment.x
()
x
| Reply
Share this ArticleLike this article? Email it to a friend!
Email sent!