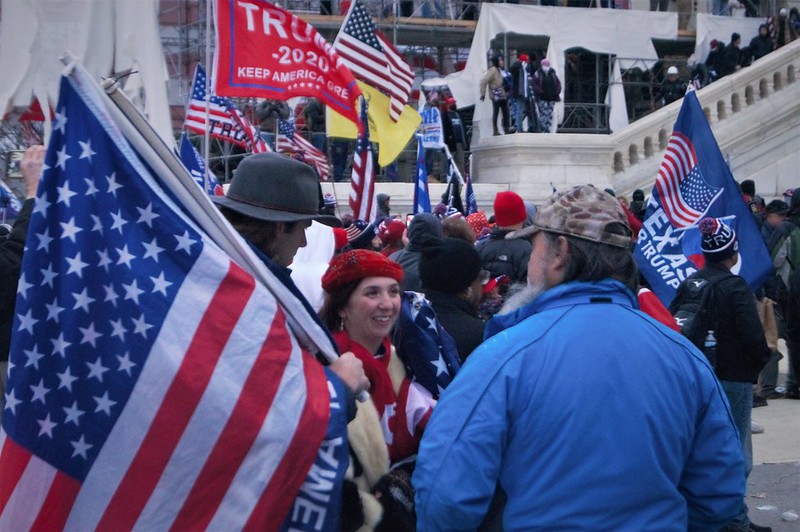 “Ah, you may leave here for four days in space
But when you return, it’s the same old place
The poundin’ of the drums, the pride and disgrace
You can bury your dead but don’t leave a trace
Hate your next door neighbor but don’t forget to say grace”[1]

“The pounding of the drums” it just rings true. We thought we were so evolved, so civilized, so 21st century. Not only were we walking on two legs, but we were also cooking our food and eating off plates. Man, we were almost there. Then it happened.

Somebody rang the bell, or blew the whistle, rattled the cage, sounded the klaxon, banged the gong or just gave a dull, monotone speech on a cold day in Washington, and Pavlov smiled, Pavlov knew.

In response, we went full goose bozo. A bunch of cavemen, wrapped up in red, white and blue pelts looking to punish the gods of DC. They couldn’t really change anything, but most of them didn’t really care. Here was a chance to do something supremely foolish, and maybe even get some stuff, somebody else’s stuff. And, of course, post a few selfies to social media. “Look Ma, I’m a congressperson.”

And, they hit the Jackpot! For some reason, the capitol building was left exposed, even though the term “storm the capitol” had been mentioned online 100,000 times in the previous thirty days they were completely unprepared. Who knew?

Of course, they didn’t really accomplish anything, unless you count the people who died. And the arrest warrants being issued and served all over the country.

Nothing really changed. We still have a new president. Taxpayers are on the hook for some windows and lecterns and spackle to fill the holes in the walls. Plus, we are probably going to get to pay for the increased security measures that the whole episode suggests are necessary.

The Houses of Congress continue to churn away in all their dysfunctional glory, with the appropriate amount of gnashing of teeth and rending of garments. Perhaps they understand just how close they came to disaster, how wrong things could have gone, how dangerous it really was to play along with the President’s disturbing, acid bath oratory. Maybe not, though.

All over the world, America has been reduced to the status of the clown car in the giant circus; it stops and we pour out, run around and make fools of ourselves and the crowd roars with approval. Then we pile in and drive off.

They say the corona virus has increased alcohol consumption dramatically in the US, and it probably has, but I like to think a lot of my recent excess has been caused by Trump. It makes me shudder every time he starts talking, now more than ever. He isn’t just pretending to be king, he thinks he is. I raise a glass of bourbon to the end of his reign and toast him with all of the distaste he deserves. It brings to mind another song.

Now it’s almost over, but it seems as if it will never end. Last week proved how odd things have become, and you have to ask “what’s next?” They say it’s always darkest right before the dawn. Oh, God, do I hope they’re right.

[1] Eve of Destruction by Barry MacGuire

Writing is a way of discovery. It brings focus to things, and it helps a person understand the thoughts that are otherwise unexplained. If life is history we should try to leave the world a better place. I contribute regularly to The Ugly Writers and The Good Men Project. and Enclave. And I am thrilled to be allowed to write a monthly column for TheWildWord.com. You can view more of my writing at https://lifeexplainedinaway.wordpress.com Besides that I am a proud father, a lucky husband and a full time employee, in central Ohio.

FacebookTweetPinEmailShares14
wpDiscuz
0
0
Would love your thoughts, please comment.x
()
x
| Reply
Share this ArticleLike this article? Email it to a friend!
Email sent!