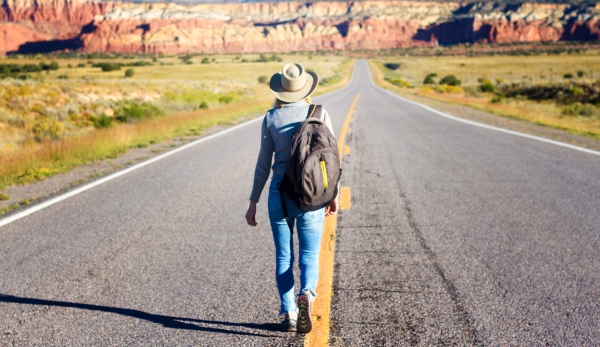 There are, of course, hundreds of replies, some frivolous, some taking exception to the thought experiment itself. But the ones that struck me the most were the replies speaking directly to a woman’s sense of safety, security and well-being in public spaces.

I’ve written about this before, recalling an experience walking a friend to a parking garage, but then being asked to walk her to her car. The garage, she had to explain to me, was the most dangerous part. And I had no idea.

I had a vague idea of women being, at best, more cautious. I had no understanding at all of their daily, unending experience of fear, or if not, fear, of having to be alert, in even the most mundane circumstances.

The above tweet was another reminder, and it still surprises me (even though by now it shouldn’t) how prevalent and wide-spread that fear is.

I am used to making my way around the world, literally and physically, without giving much thought or concern to my physical surroundings. Responses to the tweet above are a good reminder of how lucky I am to be able to do that, and how so many women don’t have this luxury.

I can’t imagine having to pay this emotional and psychological tax each day. It must be exhausting — and endlessly frustrating.

That one spoke to me because it veers into another area that I had taken for granted, the simple act of getting dressed. Which, it turns out, for women is not all that simple at all.

I get dressed wearing whatever I want, each time. While I want to look good and give off a good impression, I don’t ever really consider if what I’m wearing is sending a particular message about my body.

I put on clothes — and don’t give a second thought as to what they say about my physically, or about giving off signals of my sexual desire.

This one might seem like a repeat from others, but it goes deeper than that, and not just about drinking at a bar. Though for that, I found this one:

I’d be pretty annoyed if I couldn’t experience the peacefulness and comfort of being alone while out among people.

It’s not about the drinking, it’s about choosing to be somewhere and maintain autonomy over the experience I’m going to have. I feel that I have that, at all times. It seems to me women don’t have that either at all, or nowhere near as much as they should.

But back to the woman getting drunk and taking an Uber home. Although one second, here is a follow-up to that:

It’s no surprise, given news reports, that the backseat of an Uber is not exactly a safe zone for women. But again, on a deeper level, this goes beyond any specific locale: alone at a bar, alone in an Uber, alone on a park trail.

When alone and out in public, many (most? all?) women lack a sense of security that I (and probably most men) take for granted. And beyond any security concerns or stress having to manage threats to your physical safety, is just simply the ability to do whatever you want and not have to give a shit.

How many times have I parked my car in a garage, walked a few blocks, at night, by myself, gone to a concert, walked back to my car and and not given a second thought to any of it? Or taken an Uber to a bar, hung out at the bar for however long I wanted to, enjoyed my time at the bar harrassment-free and then gone home in an Uber without once thinking twice about it, much less worrying about any physical harm? Almost all times I’ve done any of those things.

This one got to me too:

This isn’t about being in a bar, on the street, in a park or in a ride share. This is being in your own home.

Imagine having to think twice when taking out the trash, walking to the mailbox or pulling into your garage at night?

To not feel comfortable in leaving your front or back door open to let in a breeze means you aren’t 100% secure or safe, even in your own home.

My girlfriend was once over at my place, and I had the door to the back patio open when we went to bed because I like having the breeze come through. I do it all the time. My patio is elevated and short of climbing a tree or using a ladder, there’s no way to access my patio. Still, she asked me to close it, because it made her feel safer.

I couldn’t even understand the impulse or reaction to think that way. That’s how foreign it felt to me. And that still blows my mind, how men and women sense and experience a sense of place so differently.

There are perhaps small things men can do to try to make certain situations for women better. Exiting an elevator first, so as to prevent a feeling, even if unintentional, of stalking.

Crossing the street when you see a woman approach or when you are about to pass a woman. Or, imagine, leaving a woman having a drink at a bar alone.

But one person won’t change the systemic, endemic fear and apprehension that women feel and experience.

Still, hearing and listening to stories like these can help. It can make men like me more aware. It can help us appreciate the way women experience their lives.

And that matters, and seeps in, even if slowly.

If that’s not a thought experiment worth trying to create in reality, then I don’t know what is.

All Premium Members get to view The Good Men Project with NO ADS. Need more info?    A complete list of benefits is here.

Scott Gilman writes on issues relating to understanding how to be a better man (and person) in today's world, exploring the ups and down of modern masculinity. He nonprofit communications and fundraising professional, and lives in Austin, Tex.