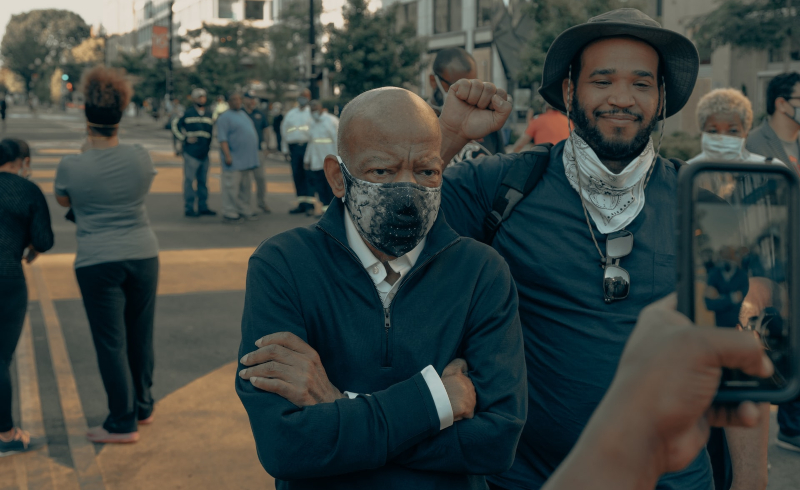 I still remember the uneasy feeling I had as a 23-year old graduate student on October 29, 1966, as I sat with 14,000 others jammed into the Greek Theater at U.C. Berkeley listened to Student Nonviolent Coordinating Committee (SNCC) Stokely Carmichael exhort the crowd. As a student activist at the time, I was sympathetic to the goals of SNCC and excited by the idea of “Black Power,” but uncomfortable with Carmichael’s angry rhetoric.

John Lewis, one of the original freedom riders in the South, had been SNCC’s Chairman since 1993 but had been replaced by Stokely Carmichael in May 1966. Many in SNCC felt that Lewis’s commitment to nonviolent direct action and mass protests was out of sync with the more radical actions some thought were needed to address racism in America.

Shortly after the shift in leadership at SNCC, Lewis left the organization to pursue a long career in electoral politics–serving as a congressman from Georgia’s 5th congressional district for almost 30 years. Few people remember the achievements of Stokely Carmichael. Everyone remembers what John Lewis has contributed. His non-violent, yet forceful, commitment to action drew people together and helped create the tipping point that has led to our shift away from the Dominator politics that we’re seeing in the White House to the Partnership politics that is beginning to emerge throughout the U.S. and around the world.

What creates these tipping points that can bring about major change? Malcolm Gladwell described it well in his book The Tipping Point: How Little Things Can Make a Difference. In the second chapter of the book, he talks about three rare, but essential, kinds of people that he described as mavens, connectors, and persuaders.

Mavens make change happen through information and ideas. They may not be identified as “experts,” but they are insatiably curious and are always learning. These are the people you ask whenever you want to know something about anything — they’re always the people in the know.

Persuaders make change happen through creative action. They are salesmen in the best sense of the word. They’re not trying to convince you to buy their product, but to call you to action in your own best interests. Persuaders are master storytellers and are able to inspire action because they are able to tap into a vision of a better world that inspires you to act.

Gladwell tells the story of two men who had learned of a plot, by the authorities of the Dominator culture in charge at the time, to arrest the leaders of local freedom fighters. Two men rode out to warn their countrymen. One was named Paul, the other William. They were both brave patriots, but one succeeded, the other failed. We all know the story of Paul Revere who warned that the British were coming and changed world history forever. Few know of the other patriot, William Dawes, who rode as far, risked as much, but had little positive effect.

As Gladwell concludes his story of the two men, he said, “Word of mouth epidemics are the work of Connectors.” Paul Revere was a master connector. William Dawes was just an ordinary man.

We know now that John Lewis embodied the best qualities of the maven, connector, and persuader. As he is pictured above wearing his mask, it’s evident that he recognized the connection between the historic action that was needed in this country to end racism, but also the changes necessary to effectively address the scientific realities of the Coronavirus.

It’s clear that there are two systems competing for our allegiance. One is an old system of domination and control. It is currently being manifested by an administration led by a man who is so insecure and wounded that he focuses most of his attention on how he can make more money for himself and his cronies. He’s incapable of the empathy required to bring the country together. In his fear and paranoia, he must put unidentified storm troopers in the streets in an attempt to create the riots he hopes will scare enough people into voting for him.

The other system is one of compassion, partnership, and standing up for the powerless who need our support. It is about creating a world where everyone wins. It supports making all lives matter by keeping our attention on ensuring that Black Lives Matter. It’s about putting good science above politics and supporting public health professionals who every day are putting their lives on the line to combat Covid-19.

Just as John Lewis was inspired by Martin Luther King, there are millions of people who are inspired by John Lewis. We still have a lot of work to do to end racism in the world and to heal our relationship to nature so that we can end the threat of the Coronavirus. Each of us has a calling, I believe, to do our small part to heal ourselves, heal our relationships, and heal our connection to this beautiful planet we all share.

I’ve been helping to heal the lives of men and their families for fifty years now. It’s time for me to pass the torch to the next generation of healers. Beginning in September, I will be offering a training program for those who are ready to become mavens, connectors, and persuaders, and are ready to step up to the calling that life is asking of you. If you’d like to learn more, come join me here and I’ll tell you more.

Jed Diamond, Ph.D., is the Founder and Director of the MenAlive, a health program that helps men live long and well. Though focused on men’s health, MenAlive is also for women who care about the health of the men in their lives. Jed is the author of 17 books including his latest, "My Distant Dad: Healing the Family Father Wound" (Lasting Impact Press, 2018) and its accompanying workbook "Healing the Family Father Wound: Your Playbook for Personal and Relationship Success" are now available via these platforms:
* Print @ the publisher's online bookstore .
* Print and ebooks on Amazon ;
* e-books on Smashwords; and
* PDF versions on Payhip.

Jed's previous books include: The Enlightened Marriage: The 5 Transformative Stages of Relationships and Why the Best is Still to Come. Since its inception in 1992, he has been on the Board of Advisors of the Men’s Health Network.  He is also a member of the International Society of Men’s Health and a founding member of the American Society of Men’s Health. He blogs for the ThirdAge, Huffington Post, BeliefNet, Scribd, and other venues. He is the only male columnist who blogs for the National Association of Baby Boomer Women.His homepage is MenAlive.com.

Facebook5Tweet2PinEmailShares7
wpDiscuz
0
0
Would love your thoughts, please comment.x
()
x
| Reply
Share this ArticleLike this article? Email it to a friend!
Email sent!