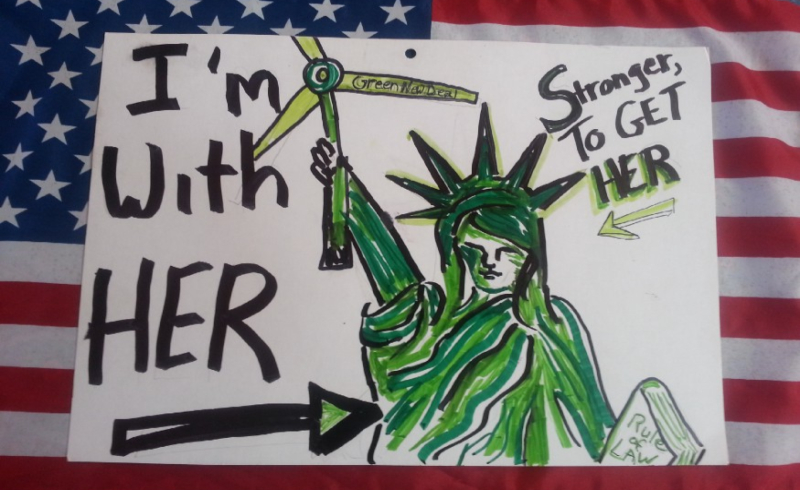 Of course, we all know that today a great blue wave will sweep the nation. He who shall not be named will be ousted, and every armed insurrectionist will surrender and melt into hugs.

We will be free and equal at last. All genders. All classes. All colors.

Well. That’s my dream. I dare say it’s a bit audacious. Too bold?

Nevertheless, I have something to hold onto.

I remember the first Women’s March with great hope. I live on a tiny island. The total population of the town here is about 7,000 people, including the burbs. For months after the election, I fell into despair and anxiety.

The dream of the highest glass ceiling shattering was itself broken. It glittered around my collapsed and tear-soaked body, like so much jagged, broken glass. Stunned. So many of us went into fight, flight, or freeze.

I was in freeze.

By the time the “biggest inauguration ever seen” came, I had gathered some functionality. A tiny news item: Hawaiian woman (she was on Maui) suggests Woman’s March on Washington, DC.

Networking did the rest.

Falling into solidarity, women and men, across the WORLD marched in cities big and small.

My husband, to my surprise, was excited to go. I was more subdued. Hawaii island is nowhere. It’s a speck in the biggest ocean on Earth. We are known for going along to get along. We invented Chill-laxin. We are laid back and non-confrontational. Nothing important, or meaningful could happen here.

We drove down the hill and a trickle of people came into view. Then it became clear it was a line of people over two miles long. On our tiny little island, more than 6,000 people, (all “kine”of people) were assembling to march. Our theme was inclusion.

The media was there too. One reporter singled out my husband because he was one of our one-man-for-fifty-or-so women marchers. I cut out the newspaper article the next day where he was quoted as saying “I am truly terrified what could happen under Trump.”

Man Demands we all need

He is tired of others defining “manhood.”

He is tired of others defining “feminism.”

He is tired of human rights being denied.

He is tired of greedy men taking control and power.

He is tired of being blamed as “an old, white, guy.”

Many other men carried signs that simply said: “I love strong women.” Those signs, especially when carried by men, make me a strong woman. They also display considerable manliness, what I refer to as magnificent masculinity, in men with the hearts and minds to carry them.

It’s largely forgotten now, just like the first Woman’s March. But we should not forget.

Looking back, E Pluribus Unum is the better sign. We both knew there was “stormy weather ahead, and indeed, we are seeing it still. But my husband’s sign, out of the many, one, is the official motto of the United States of America. Much more patriotic. Powerful. True.

The good “left” in the world

We are one people, and should never forget it. Our tribe, our race, is the human one, and we have to learn to truly care about that fact.

We need men to care about equality. Trump helped us create allies, including #MeToo, BLM, and March for Our Lives. Let’s not forget that MFOL, begun after the Parkland, Florida, massacre, is precisely the nudge that got a Swedish Schoolgirl, named Greta Thunberg, to sit down in front of her parliament in a school strike for climate.

Greta Thunberg was named Time magazine’s person of the year, and yes, we all tasted schadenfreude when Trump was outrageously, (but predictably) jealous.

My point is that standing up for all the good left in the world matters a lot.

As horrible as he is, Trump is not a cause, but a symptom, of inequality for all. He openly displays what he thinks of BIPOC, and women, Earth, LGBTQ+ people, and more. Trump then calls it some sort of “respect,” thus straining our patience, and tolerance, for what words mean.

My husband is still terrified. Not of Trump, but of the backlash of his cult and the worldwide invitations on offer for authoritarian regimes, fires, floods, extinctions, and pandemics under the control, and/or chaos, of people who can’t see the big picture.

Our future depends on brave men and women

Out of the many, one? I think it is inevitable that we unite if our race is not to destroy our civilization (or lack thereof) in the next few years.

I think in one thousand years, all survivors will be there. I hope also, for wombats, jaguars, feminists of all kinds, trees, and even, Americans.

But just as the Blue Moon predicted the Blue Wave that we all need today, our fears and anxieties should also remind us about who all human allies are, and how Earth herself is our greatest and most resilient ally.

Out of the many, we are one. One tribe, one people, one nation, indivisible(!?).

Let’s keep working for “Liberty and justice for all.”

Writer, Defender of the three dimensional, and Cat Castle Custodian.